Azimio presidential candidate heightenly clarifies on a video of him that is going viral.According to Raila video was edited by his rivals which shows how he was discriminating against the members if the  christian Faith.

a section of Christian believers had called out Raila over the remarks, accusing him of causing a rift between religious groups.

In his defence Raila said he supported equal rights for all religious groups in kenya. He also promises once elected to office on August 9th ,no persons will be discriminated as such actions will not be tolerated.

”I was addressing a group of Muslim women who came to see me and were complaining about discrimination when they apply for passports or ID cards.I wanted to tell them that I have been a Member of Parliament and I have seen that kind of discrimination of Islamic faithful who live in Lang’ata and Kibra constituencies,” Raila stated.

Raila affirms that the constitution protects all kenyans despite their religion. 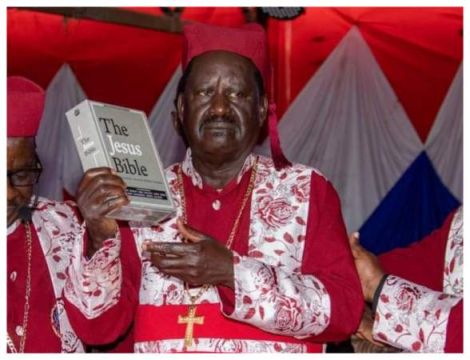 “The Church does not need to be protected by the president; it is already protected by the constitution. We shall respect all religions. I’m a Christian but that does not mean discriminating against other religions, the Muslims have equal rights as Kenyans,” Odinga said.